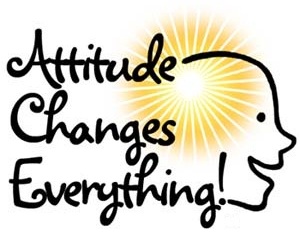 Attitude is a little thing that makes a big difference.
Winston Churchil

Well today I want to share a little but very powerful story that I just read from an online Book, hope you’ll like it and shift your thinking to Positive.

One day, there was a kingdom that was ruled by an emperor. He was assisted by the prime minister to help him managing the kingdom. The prime minister was also an adviser and a close friend of the emperor because the emperor always asked for his advice or opinion about something, and he always accompanied the emperor hunting in the forest. One of the emperor’s favorite hobbies was hunting rabbits. The prime minister had a unique characteristic. He was so positive in every situation that happened to them. Whenever he was asked by his emperor about his opinion, his answer was only one – ‘it’s good.’

When it’s raining and the emperor asked for the prime minister’s opinion about that, he answered, “it is good, my emperor. We will not feel hot, we are protected from the dryness and the plants will fertilely grow.”

When it’s hot, no rain fell down and the emperor asked him, he answered, “its good, my emperor. If it is not raining, emperor can go to the forest for hunting some rabbits.” One day, he wanted to go hunting. Because the prime minister was in the prison, he decided to go alone into the forest to hunt some rabbits. He was out of luck because he had not yet found the rabbit. But he did not give up and kept walking and searching. When the day reached dusk, the emperor could not find the way home because he had walked too far. He lost in the forest. He shouted loudly if there was someone hearing his voice. After a while, a group of men came toward the emperor. However, they looked strange, they brought spears, looked like primitive men. Then they raised their spears targeted to him and because the emperor could not fight with all of them alone, he surrendered when they caught, bound and subsequently brought him away. He was brought into village, a primitive village where they lived in. they gathered sticks and put them around the emperor. The emperor knew that he would be burned down by fire. He was sorrowful because he realized he would die that way. Suddenly, one of the primitive paid attention to his hand and realized that one of his fingers had been lost. The primitive man began to shout in loud voice and told others. The others were scared about that. The primitive man said that someone who had incomplete hand fingers was a demon and that would curse them bad. After a long conversation, they eventually set him free and let him away from their village.

The emperor ran at his highest speed to get out of the fearful village. Fortunately he could find the way to his palace and was finally safe. With the exhaustion striking him, he went to the prison and told the guard to free the prime minister. He was so sorry and apologized to the prime minister. The emperor then told him what he had experienced a few moments ago in the primitive village. He realized that if he did not lose his little finger, maybe he had been burned and dead. He knew it was good losing his little finger because he had been saved by his incomplete fingers.

When the prime minister was asked about his opinion when he was sent to the prison, he answered with his favorite words, “it’s very very good, my emperor. If I was not in the prison, I perhaps would go hunting with you and we both would be caught by the primitive men. Because I had complete finger, I would be burned down and died. I’m so lucky and my life is saved by the emperor sending me to the prison. Thanks a lot, my emperor.”

A Message for everyone:

Every day, every hour, every minute and every second, something happens. Everything always change, no matter it is good or bad one. We believe that we have ever experienced either something good or bad in our own life. If what is coming to us is good, we will be glad and face this world confidently. We will have positive thinking when something good happens. And when something bad is coming to us, we will behave differently. We will have negative thinking, feeling, emotion or whatsoever and we will probably face this world worse. We know that we or everybody in this world must have had something bad striking us. Nobody has never experienced something bad in their life. However, we must know and realize that when we’re in bad feeling, emotion, mood, or thinking, it will not help us overcoming the problem and also the problem we are facing will not go away from us. We must think clearly that it is far better to have positive thinking than to have negative thinking when the problem is coming to us. By having positive thinking, we will face the world better, we will be happier, we will think clearly and wisely, and eventually we will find the way to solve that problem. When we are ruled by our negative thinking, we will be in more problems and everything is not going to be better. You now have choice for positive or negative thinking. You are fully responsible for your own life.

There is a law of universe that is called law of opposite. This law states that everything in this world always has two sides oppositely. So we can say that for every negative or bad thing, there will be positive or good thing, Bad-good, sad-happy, poor-wealthy, failure-success, positive-negative, etc. Nobody can break this law. This law works for everything and everyone in this universe. All we can do is doing the best we can in response to what happens to us. Remember, what happens to us will not make differences, but our attitude in response to what happens to us will make huge change to our life. We give the meaning of what is happening to us. We can respond it in positive or negative way. Once again, it depends on you to decide what your attitude is to something that is happening to you. Everything has no meaning until you give it the meaning either good or bad. It’s better to delete all of negative things from your mind. Always be positive and you will see the changes in your life and realize that it will make your life easier.